skip to main | skip to sidebar

Haiti's revolution was bad ass. It was daring in it's mission, breathtaking in it's scope and best of all it remains was one of the baddest, meanest, grassroots, mobilization of the masses movements of all time. The players Toussaint, Dessalines, Sans Souci and thousands more black men and women; the battlefield, a place known by the indigenous Arawak as "Ayiti"-- a place and a people taken over and (re)created by colonialism and Western imperialism. The Haitian Revolution shook the project of colonialism to it's core as black Haitians swept through plantations across the country and pushed white power out forcefully, violently and triumphantly. The first free Black Republic.
It took an earthquake and the death of thousands for me to finally turn and look Haiti in the face. To look back at that history that is OUR history-- a history of struggle and victory and the legacy of a free people. A free people who were then betrayed, exploited, maligned in a series of political and economic actions, international policies and blatant manipulation by French and later U.S. imperialism. It took a tragedy for me, born in the Dominican Republic- Haiti's reluctant and dare I say self-hating neighbor (an arbitary demarcation made nation again by colonial powers. DR and Haiti are the same island) to attempt to pick up and connect the shattered pieces of our diasporic legacy.
I'm youngish, and I still have so much to learn about the struggles of people of color historically and today--A product of spoon-fed white liberal education that did little to raise my level of political consciousness. But I do know Haiti's Revolution was testament that change could come about for the oppressed and marginalized. We can get into a whole discussion about violent vs. non-violent action. But for the moment, let's just appreciate this watershed moment in history for what it was. Slavery was never the same again and white masters no longer slept soundly-- so they crushed post-revolution Haiti in an attempt to make an example of it-- to show that there could be no success. Haitians were pathologized, demonized and ostracized. So that by January 12th 2010, Haiti might as well have been some remote planet. Instead it was right at the U.S. doorstep, right here in our own hemisphere. But let's not be naive, or sound so shocked such things could happen in our hemisphere, when such things happen in our own country (READ: Katrina) and micro-agressions and acts of systemic and structural violence against men and women of color, queer people and working class/poor communities . There is no such thing as a natural disaster.
This past week I heard Tiffany Ruby Patterson speak about Haiti and Black Internationalist Politics and Activism. She spoke about the struggles of "global Africa" since the Middle Passage, and she spoke about a universal emancipation that was not just about freedom for black folk but for all oppressed people. Dr. Patterson laid out the history and the importance of the Haitian Revolution. I peeked at two amazing books she had with her: From Toussaint to Tupac and Race Against Empire
She spoke of the creation of the "black international", silences in history and the U.S. occupation of Haiti, the militarization of aid, and a time when U.S. black communities and communities of color in general joined with struggles and movements (ie: negritude, African liberation movements, Third World Liberation movements and yep, even (perhaps especially, at one point: communism))-- because it was about tearing down oppression at it's root, about making that a possibility and a reality for everyone and no matter what race, gender, nation, sexuality, creed that was something we could all be down with. Now this is two parts retrospective thinking and a heavy dash of back in the day I did hunger strikes and sit-ins romanticism, but it's a part of our collective history that I am really interested in because no matter how real or imagined solidarity and coalition-building was there's no doubt in my mind that we've taken a step backwards and today in 2010 we have more than enough tools and there's definitely not a lack of issues. The issues, however, have become more insidious, more systemic, more manipulative and we have further internalized and normalized them. How can we move forward? How can we serve our communities and serve each other? How can we take action?..... Those are the questions we should be asking....
Haiti, I am sorry. There is a debt we owe you. I am sorry that we have forgotten, that we have been spread across the world and no longer see the need to connect our struggles. Haiti, I am sorry that we no longer see into your face and see a reflection of who we once were, who we once dreamt of being and who we could have become.
Posted by For A Stronger Tomorrow at 11:22 AM No comments:

Danger of a Single Story 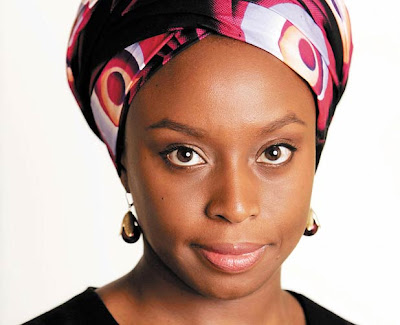 Watch Chimamanda Adichie on Ted.com. (Please click the link on the title above)
Posted by changetoday at 9:36 AM No comments:

So, I woke up this morning with something to Say (which I usually do, but let's just leave that alone for dramatic effect) because I've just spent the past two days with two of the most real, inspiring and empowering women of color I know. Our talks in the last couple of days have really demonstrated that we are in dire need for CHANGE. And I mean that real systemic-structural- beat-down-the-Man-and-his-twisted-armies-of-Oppressors-on- every-imaginable-level of-world-society-kinda-change.

But let me just say a word (or two) about "REVOLUTION". Revolution has become cheesy. Yea, I said it--Cheesy because it's been commodified from Che T-shirts, to images of Angela Davis' glorious fro and the raised fists of the Black Power and Third World Liberation movements co-opted into kitschy graphic designs. Cheesy because while the contributions of MLK, Malcolm X and Ghandi to the world and to the fight for freedom have been great and far-reaching, their words have been made into cliched soundbites for college dorm room posters, coffeemugs and t-shirts for a generation (of which I'm very proud to be a part of) that has come to see revolution as something past, something retro, something static belonging to our history books. There's nothing further from the truth.

Also, just as an aside: since this post is about "de-cheesing" the revolution, "cheese" as in corniness but also "cheese" as in money: READ: "The Revolution Will Not be Funded"-- a seriously on-point, hard-hitting book on the non-profit industrial complex (posts on this to come) by an amazing org of radical women of color INCITE!.

What we're talking about is a revolution of minds (yes, Bob Marley...), internal revolutions in consciousness and creating change on our terms-- being creative about that change that activism, using the tools at our disposal and TALKING BACK and TAKING BACK as young people of color. Activism is beyond rallies and marches, activism is a choice, a choice to challenge power and speak truth to power and understanding that knowledge is power.... Okay, imma slowly step off the soap box...
All I really wanted to say was: this blog strives to be a space for us to think about activism and how we can create social change from the ground up. And we'll try to keep the preaching to a low...
Posted by For A Stronger Tomorrow at 8:51 AM No comments: